President Donald Trump on Tuesday signed a law that ensures federal employees traveling on government business can be reimbursed for using Uber, Lyft and other transportation network operators.

Rep. Seth Moulton (D-Mass.) introduced the Modernizing Government Travel Act in January, and it passed the House that month. This month, the bill cleared the Senate.

Already, the U.S. General Services Administration, which oversees civilian travel programs, had given federal agencies the go-ahead to reimburse for transportation network companies, according to a July 2016 bulletin. Then, the GSA permitted federal agencies to use such operators "when advantageous to the government and permissible under local laws and ordinances." Read Full Reference Article 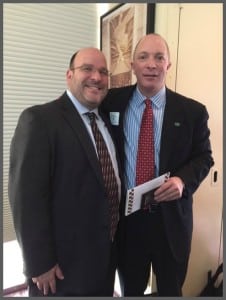 Likening ride-hailing services to “organized hitchhiking,” COO Tony Simon represented the livery industry’s perspective on Transportation Network Companies at a recent breakfast panel hosted by GovPartners, an Ashburn-based company that specializes in government acquisition support service. About 50 transportation executives from private companies and government entities such as the DC Taxicab Commission and the Metropolitan Washington Airports Authority attended the event, which took place Feb. 4 at Clyde’s in Tysons.

Other panelists at the event included: